Verbier and Zermatt pistes map tweaked for the beginner Snowboarder

Most people learning to ski or snowboard will be familiar with the piste map and the colouring system used to grade the runs; blue being the easiest, then red, followed by black for the more advanced and then in Switzerland, yellow for the itinerary runs.

However for the uninitiated snowboarder in an unfamiliar resort, piste maps can be misleading. Clearly the best idea is to take a snowboard lesson and have an experienced snowboard instructor show you the slopes which are best suited to your level. In both Verbier and Zermatt the slopes that European Snowsport ski instructors use to teach skiing on are not always the same slopes that our ES-Ride instructors use to teach Snowboarding on. Even if you are a competent skier trying snowboarding for the first time, don’t be fooled into thinking that easy runs on skis are easy on a snowboard!

The basic rule should be that until you can quickly and confidently link turns and let the board run flat and straight, you should avoid narrow flat and/or tracks (often the very pistes that learner skiers feel the most relaxed on!). These are more than often marked as blue runs , and can usually be found meandering through the trees. The problem with this type of run is that they are too flat to side slip, and too narrow to easily turn on. This can easily result in catching an edge and a painfull fall…which is why you should wear protective gear when learning

I don’t want to discourage anyone learning from exploring the mountain, so I’ve tweaked the Verbier and Zermatt piste maps for the beginner snowboarder. There are plenty of excellent slopes for practicing your turns in both resorts, wide open pistes with a constant shallow gradient and a chairlift to take you back to the top.  On the maps below the runs marked green are the slopes to aim for, and the areas which all the snowboard schools in Verbier and Zermatt use to teach on.  The purple runs are the ones that may look tempting but which, if you want to preserve your coccyx, should be avoided. 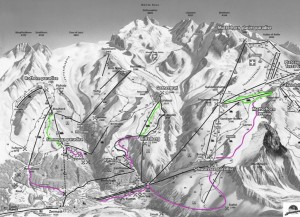 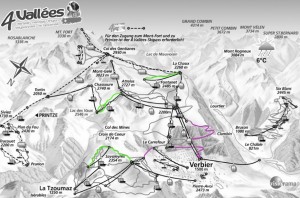 You’ll notice that most of the runs to avoid in both Verbier and Zermatt are the ones leading back down to town. I understand that some people find it frustrating taking the lift down at the end of the day, so a better option than heading down to Medran in Verbier (and with the added incentive of an après drink) would be to head to le Rouge. Similarly in Zermatt you can take the lift down to Furi and then carefully make your way down to the Henu Stall for a beer!